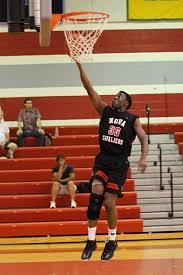 Electrifying, riveting and breathtaking; Sango Amolo was no question one of the most exciting players to watch during the Cavs ’09 – ’11 era. He was part of the core that brought NOVA Cavaliers to the most successful period in Program’s history. Amolo’s contribution to the team helped built some of the best moments during his illustrious Cavs career.

Amolo was honored with the NOVA Cavaliers Award in 2009 and Battle of NOVA Invitational Tournament MVP, where he was sensational and averaged nearly 20 points in just two days of tournament play. He was also named to the All-Tournament Team Selection in YBOA State Qualifier, Big Shots DC Assault, and Big Shots VCU Richmond. During his McLean Highlanders career, he was named to the Liberty District (’10-’11) and Westfield Bulldogs’ Bash (’11-’12) All-Tournament Team. Amolo was also a Second Team All-Liberty District Selection (twice) and named as McLean Highlanders Tri-MVP for the 2011-2012 season.

Although he was one of the most talented players on the team, no one outworked Sango Amolo on the basketball court. He was a gym rat who fell in love with the sport at a young age; staying before and after practice was a routine for him, as he kept improving on his game and made himself a player to be reckoned with by the end of his career. It was only fitting when Amolo finally received much-deserving recognition during his senior year, when he helped the McLean Highlanders to a School’s best 23-4 record and their first District Title since 1971.

Cavaliers are proud to announce that Sango has accepted the offer to play basketball at Gettysburg College. We look forward to his promising career as a member of the Bullets. He will forever be part of the NOVA Cavs family and his contribution to the program will be everlasting. 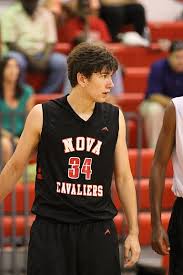 Thomas Van Wazer took the NOVA Cavs to new heights during his three year tenure. Considered as one of the most important players in the program’s history, he was the team’s undisputed leader during his illustrious career as a Cavalier.

Van Wazer was the second player in Cavs history to be named the team’s Most Valuable Player for three straight seasons (’09 – ’11). He was also McLean Highlanders JV Team MVP in 2009, Varsity Team Co-MVP in 2011 and again in 2012. Van Wazer was named Westfield Bulldogs’ Bash Tournament MVP (2012), Liberty District Defensive Player of the Year (2012), and a back-back First Team All-Liberty District recipient (2011 and 2012). Van Wazer was also named to the First Team VHSL All-Northern Region team in 2012; a first time award-winner for this program.

Despite the abundance of individual accolades, Van Wazer was always about putting “Team First.” He led the Cavs to a combined seven AAU Tournament Championships, six Tournament runner-ups, and a 99 – 56 overall record in three seasons. He played a significant role on a team that finished as AAU DIII National Championship Runner-Up (2009) and USBA National Tournament Semifinalist (2010). Viewed as the ultimate competitor, Van Wazer never backed down from any challenge and always embraced the opportunity to play against the best. As a result, his Cavalier teammates took on the personality of their unquestioned leader and consistently brought their best against the fiercest competitions.

During Van Wazer’s career, the Cavaliers enjoyed the most successful run in their eight years history. The Cavaliers are forever indebted to the legacies he left behind. From the entire NOVA Cavs family, we wish Thomas the best of luck in his future endeavors and thank him for always putting the team before himself; he is truly a special individual. 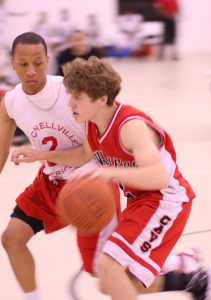 The crafty point guard from Falls Church, VA was the heart and soul of the team during all four years with the Cavaliers. One of four players left from the Cavs inaugural season, Brosnan exceeded way beyond expectation by becoming the most indispensable player on the team.

He was named Most Valuable Player of the Cavs for three straight seasons (’06-’08); MVP of the McLean HS JV team in 2007 and MVP on the Varsity team in 2009. On the AAU circuit, Brosnan was named to the Hoop Magic Fall All-Jamboree Team in October of 2007 and Virginia Invitational Tournament All-Tournament Second-Team in 2008. As a Junior at McLean HS, he was named Honorable Mention All-Liberty District (’08). As a Senior in 2009, Brosnan was named to the First-Team All-Liberty District and Honorable Mention All-Northern Region Team. He was also invited and played in the DigitalSports Showcase All-Star game.

Never the fastest or the most athletic player on the court, Brosnan always managed to outplay his opponents by utlizing his uncanny court awareness. He had an unbelievable knack to keep his cool when facing pressure and controlled the game simply with his decision making ability. He also steadily improved his game each year and always had the desire to be great. During his career with the Cavs, Brosnan provided great leadership and a strong locker-room presence that kept the team together. He was the true definition of what a ‘Cavalier’ player is all about.

Brosnan plans on attending James Madison University in the fall. The Cavaliers program are proud to call Peter an Alumni and wish him the best of luck at JMU. 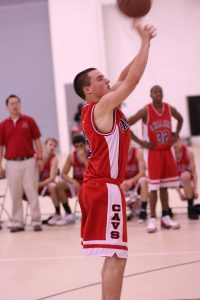 This multi-talented athlete from Vienna, Virginia was the unquestioned leader for the Cavaliers for many years. Whittington joined the team in the fall of 2006 and immediately meshed with the team. His fearlessness quickly won over the hearts of his fellow teammates as they unanimously elected him as the captain of the team in the following season.

Whittington received many honors during his High School and AAU career. As a sophomore on varsity, he started every game for Marshall HS and received the Statesmen Award at the conclusion of the season (’07). In the ensuing years, Whittington was named Team MVP in consecutive years during his junior (’08) and senior (’09) seasons. He was also named the Cavs’ Team MVP for the fall of 2007, named to the NOVA Cavaliers Jamboree Second-Team All-Jamboree and honored as the recipient of the NOVA Cavaliers Award in 2008. In his final season at Marshall HS, Whittington earned the honor of All-Liberty District Second-Team and led the Statesmen in scoring. He was also named as Statesmen Athlete of the Year Award at Marshall HS after the completion of his HS career.

Although basketball was never his primary sport growing up, Whittington developed into a basketball player with commitment and dedication. He always treated his teammates with genuine respect and dazzled them with his courageous play on the basketball court. Without his charisma, it would have been difficult to imagine where the Cav’s program would be like today. Whittington demonstrates how a special individual can make a positive impact to his community.

Bryan has been accepted to Virginia Tech and plans on attending there in the fall to follow his family’s “Hokies” footsteps. We wish him the best of luck and are extremely proud of his success as a member of the Cavs program. 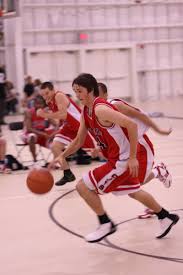 This native Washingtonian player from Northwest DC came as an unknown commodity to the Cavaliers in the spring of 2008. Keenan wasted little time establishing himself as one of the most valuable players on the team. Keenan’s arrival helped the Cavs achieve their most successful season for this program at the time.

The Georgetown Day School (GDS) standout accomplished many incredible feats in his final season at the school. As a Senior, he led the Hoppers in scoring, assists, free throw percentage and was second on the team in rebounds. Keenan was also the fifth leading scorer in the Mid-Atlantic Conference (MAC). At the conclusion of the ’08-’09 season, he was honored as an All Mid-Atlantic Conference Selection and awarded as the Hoppers Team MVP. As a Cavalier, Keenan was named to Virginia Invitational Tournament First-Team All-Tournament and NOVA Cavaliers Jamboree Second-Team All-Jamboree in 2008. He was also named the winner of Nova Cavs Coaches Award for the same season.

Keenan was a “Coach’s Dream” type of player. He was often asked to play multiple positions on the basketball court and handled the task brilliantly without any complaints. Despite the intense competition that was seen regularly on the AAU circuit, he never backed down from any challenges and played the game with tremendous passion. His intensity always brought out the best in his teammates and held the team together during the most difficult times. The addition of Keenan took the Cavaliers to a different level and made them a dangerous team in 2008.

In February of 2009, Max accepted a full tuition scholarship to play DIII basketball at McDaniel College in Westminster, Maryland. Max transfered to IMG Academy for 2010-2011 school year and is currently a Walk-on Player at Tulsa University (DI). We are extremely proud to have Max as an member of the NOVA Cavs and look forward to his future success at the college level. 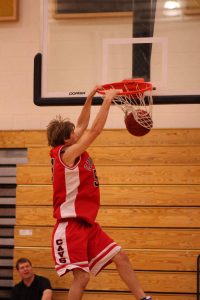 The ultra athletic forward from Landon School was a pleasant addition to the Cavs for the 2008 season. Upon his arrival to the Cavaliers program, Stephen Matthews had spent the previous 3 seasons with their rival Fairfax Stars. Matthews quickly wasted no time and immediately made his presence known with his gifted skill on the basketball court. The 6’5 wing man had an silky smooth jump shot which was unusual for a player his size; then to top it off, Matthews was blessed with the amazing ability to sky with the best. Known as a high flyer, he often awed his teammates and opponents with some of the most impressive dunk displays during games and practices.

As a Senior in 2008-2009 at Landon HS, Matthews was selected to the All-IAC Tournament Team and to the All-Montgomery Private School All-Star Game. Having been a member of the Varsity team for 3 year and a 2 year starter at Landon, he was also named as the Golden Bears Varsity Team Captain during his Junior and Senior years. Matthews was also named as an All-Star at Five-Star Camp and at the conclusion of his HS career, he was honored with the Career Achievement Award at Landon.

Matthews will be playing Division III College Basketball at St. Mary’s College of Maryland in Lexington Park the fall of 2009. We wish him the best of luck and hope to see him fulfill a promising career.